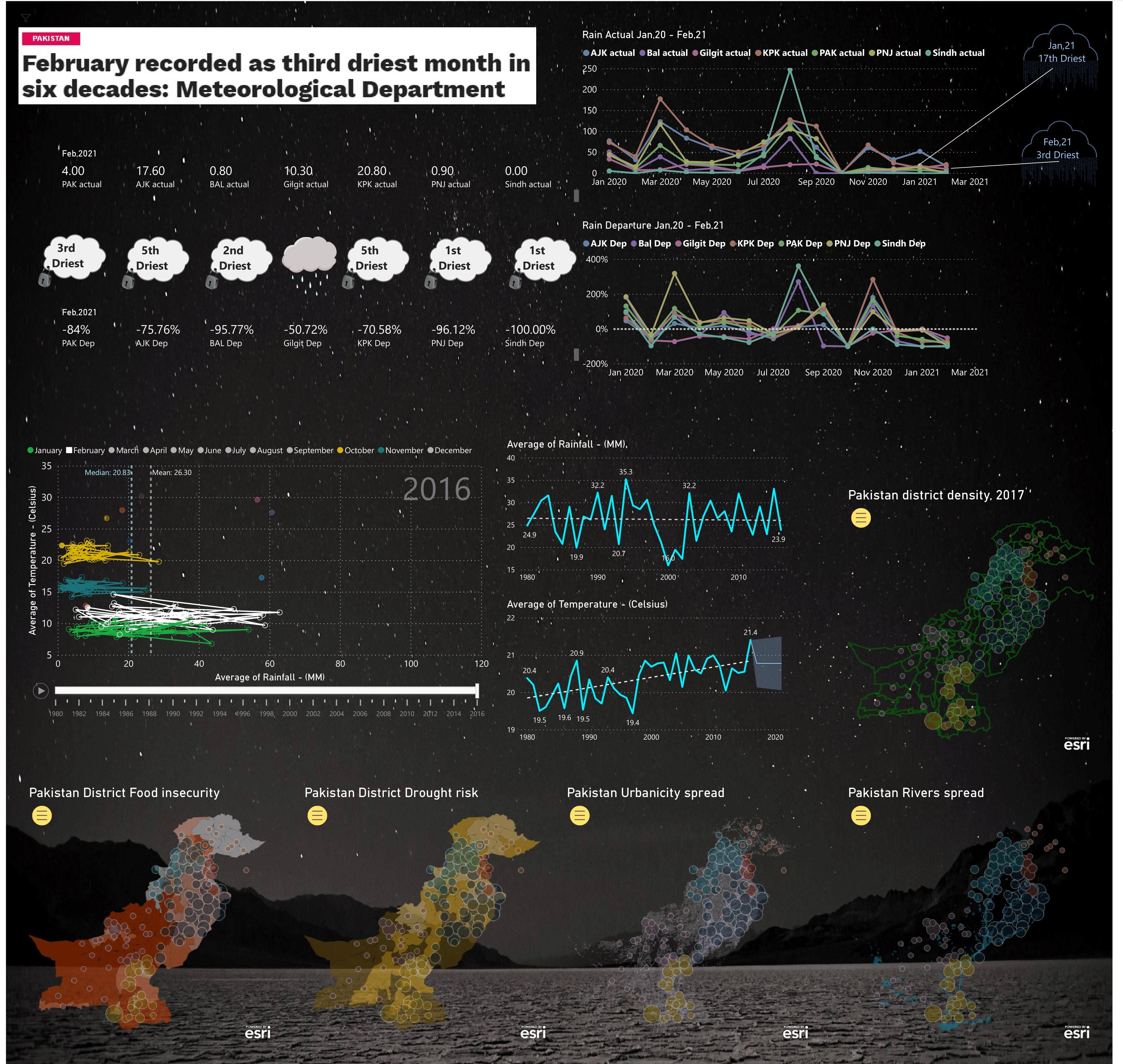 February 2021 was recorded as one of the hottest and driest months in the last 60 years of Pakistan. Most of the country experienced no rain except Gilgit, where glacier and 7000+ peaks are located. Deviation from historical normal was -84%! This dashboard has been created to investigate the root cause of the rapid climate change in Pakistan, which has wide-ranging impacts on the environment and its people. Historical data has been gathered on various climate indicators such as rainfall, temperature, forest area, water consumption and agricultural land. Also, population and water security risk data have been visualized to identify any trends.

The upper portion of the dashboard focuses on the micro-level details investigating actual and departure rainfall trends at the provincial level from Jan 2020-Feb 2021. Next, a scatter chart with a play axis has been created to identify the historical trend of rainfall and average temperature from 1980-2016. It can be interpreted from the graph that October and November are usually the driest months of the year. Historically, February has experienced rainfall around the mean and median of rainfall in a year.

The middle portion of the dashboard consists of population density, food insecurity, drought risk, and river maps to visualise the population clusters. The urban spread map confirms the validity of the population dataset as we can observe that urbanicity is high where there are large circles (high population density) and more close circles(many districts of small areas close together). From the map of the rivers, it is visible that there is no life without water as Pakistan's population is clustered around the major rivers of Pakistan.

The lower portion of the dashboard plots simple line charts to visualize how extensively Pakistan's forest area, freshwater resources, agricultural land and irrigated land area have been used over the years. Forests greatly influence climate change. An alarming revelation is that although the globally recommended forest percentage is 25%, the forest percentage is only 5% in Pakistan, which is also declining steadily. The annual freshwater withdrawals are also increasing with the population growth, leading to water scarcity. Lastly, the Asia specific water risk rating map for 2021 shows Pakistan is in the topmost densely populated countries with extreme water security risk in the region.

It can be concluded from the in-depth analysis that the problem is not with rainfall in the month of February; rather, there is an issue at the macro level. Pakistan’s water security situation is critical. Forest plantation, dams, and other measures are required to conserve water resources on a priority basis.