According to the World Health Organization, Pakistan is ranked 5th among B High Burden Countries around the globe. In the Eastern Mediterranean Region Pakistan accounts for around 61% of...
More

Child labour is a menace to humanity that needs to be cured. Unfortunately, according to the Global Slavery Index 2013, Pakistan is ranked third among the countries that experience the worst forms of child labour. Children are forced to work in miserable conditions and are subjected to emotional and physical abuse. The severest form of child exploitation and forced labour is prevalent in the Brick Kiln industry. “According to UNICEF estimates, two-fifths to two-thirds of all the working children in Pakistan toil in brick kilns.” Brick employers force innocent children to contribute to the production of bricks under inhumane conditions. Accounts of child labourers in illegal brick kilns in Pakistan depict a picture that is “more reminiscent of a Victorian workhouse than a 21st Century factory”, where not only are the working conditions dangerous and unhygienic, but the labourers also have no social security. Hence, they cannot ever get out of the vicious cycle of poverty. (Miller, 2017). Therefore, it is essential for the public sector to take actions to prohibit child labour.

This research provides an empirical assessment of the district level child labour rate in brick kilns by using the Punjab Brick Kilns Census data collected by the Urban Unit. The data was collected of 126766 employed children by identifying around 10,000 brick kilns in Punjab. For analysis, the database has been cleaned to keep observations for only employed children under age 14, the child labour age limit clearly stated by the Punjab Prohibition of Child Labor at Brick Kilns Act. There are 10,347 brick kilns identified across the province of which 7,966 are functional and 2,381 are non-functional. There are 126,557 children in the data set, out of which 94,052 are enrolled in a school, and 5 years is the lowest age of a child working at a brick kiln. 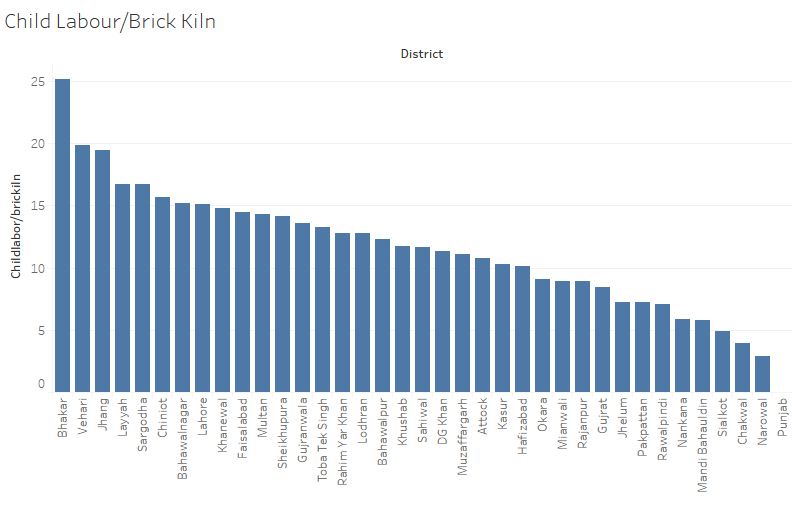 Age can also be an important determinant for analysis. The below graph plots the same district level graph with the age group now being the differentiating factor. It can be clearly observed that younger children are more vulnerable to child labour, there is more than twice the employment of younger kids compared to children above 10 years of age. On average, more than 65% of children in Punjab employed at Brick kilns are below 10 years old. The results have an important policy implication that stronger laws need to be made that protect the young and innocent children that these brutal brick kiln owners are exploiting. A more saddening fact is that even a 5 years old kid is working in these harsh conditions.

Another graph against gender attribute is a plot to identify cases of gender exploitation. It can be confirmed from the below-plotted graph that no gender abuse is occurring at the brick kilns. However, on average 9% more males are employed than females. This could simply be due to the harsh physical requirements of working at brick kilns.

Therefore, we use educational indicators to understand the child labour trend further. We can observe from the below graph that Bhakkar has a very low literacy rate (10+ years) of 49 (below Punjab average) and both Vehari and Jhang also have a low rate of 55. (below Punjab average). As literacy rate is the cornerstone of a developed region, we can state that ignorance of education in these districts leads to low development and creates vulnerable situations that force children to work. Lastly, the NAR of all 3 districts is also reported to be low (all values in ’50s) and below-average which shows that children actually attending primary schools are very low.

The multitude of possible determinants described emphasizes the need for a multi-pronged approach. The strongest implication of the analysis is that child labour at brick kilns should be reduced by targeting adult incomes and poverty and weakening the incentives pushing parents to send their children to work. The influences on child labour at brick kilns and household decision-malting are numerous and complex. Not only is more data required at the aggregate level to strengthen this analysis, but more studies need to be conducted on the micro-level in the case of Pakistan. Policies designed must take local conditions and localized types of child labour at brick kilns into account if they are going to be effective.

This blog post is written by Zainab Salam, a student from the batch of 2020 at Lahore University of Management Sciences.