Mukhbir is an urdu word which means a secret agent, in terms of security agencies, Mukhbir is an unsung hidden hero who is always there to provide the most crucial information to the...
More

Pakistan has been facing a financial crises since its independence and while there may be many other reasons, political crisis has always been a major one. The PTI government at the...
More

In a report by the World Health Organization (WHO), it has been recognised that "people of any age who have serious underlying medical conditions are at higher risk to get critically...
More

Deterring and punishing crime is one of the fundamental responsibilities of a state. Rising crime and deteriorating public safety can discourage investment and business activity, damage...
More

Over the last two to three decades, the number of highly qualified and highly trained manpower from Pakistan has been moving. This number has been increasing rapidly due to a number of...
More

Gender discrimination is a bitter truth of the country we live in. Women are deprived of equal opportunities throughout the social and economic sectors of Pakistan. It is sad to note that Pakistan is reported the second lowest in the overall measure of gender biases in World Economic Forum’s Global Gender Gap Report of 2013. Pakistan’s bureaucracy is also tainted with this dark reality. The purpose of this study is to analyze how our bureaucratic system has evolved over the years and to what extent the gender discrimination issue has been resolved.

The Employment Statistics of Bureaucrats looks at the size of the bureaucracies of the Federal Government, the 4 provinces and Gilgit Baltistan. This database was compiled for the years 2010-2018. The aim of our analysis is to see if the number of female bureaucrats increased over the years, and what share of each grade they constitute.

These sudden declines and rises make it difficult to make meaningful comparisons over the years. The reasons for these changes might be errors in data collection or the recategorization of various employees and attaching them to bureaucratic grades. For example, government employees not directly in the provincial administration might have been reclassified as being in the administration, or previous direct employees of the provincial government might have been transferred into other departments. We did not find any evidence of mass hiring or laying off of government employees on the scale that the graphs suggest. Attached below is the graph for the number of bureaucrats in Sindh, notice again the steep rise after 2013.

Over the federal and Punjab governments, meaningful comparisons can be made due to the absence of any jumps.  In both cases, men vastly outnumber women in terms of total number, and the difference has only increased in recent years. This implies that equal opportunities are not available in the bureaucracies of both the federal government as that of the largest province, and that no real action is being taken to address this problem. This issue persists in terms of grades as well, women are vastly underrepresented in all grades compared to men at the federal level. The diagram below highlights the wide discrimination gap between male and female bureaucrats which has been consistent over the years. 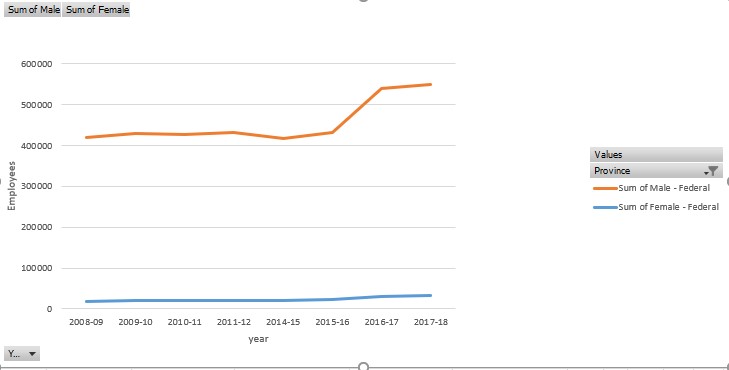 This blog post is written by Syed Ghalib Qadri , student from the batch of 2020 at Lahore University of Management Sciences.