The data has been collected from the development statistics of each province. It looks at the provincial budgets for the main provinces of Pakistan: Punjab, Sindh, Khyber Pakhtunkhwa, and Balochistan, from 2002 till 2019. However, for some years, the data was missing from the website. Therefore, the available data is from 2002 till 2017 for Punjab, 2008 to 2017 for Sindh, 2013 to 2019 for KPK, and 2007 to 2017 for Balochistan.

The sectors chosen for this study are common as well as important across all of the provinces (except for Women’s Development – this has been chosen for better quantitative analysis). The sectors we would be discussing in this post are: 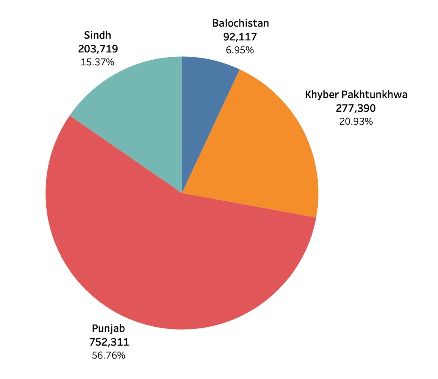 Below, we have an infographic showing how the budget was spent throughout these different sectors, in different provinces, and how they compare to each other. The bigger the size of the bubble, the more money was spent on that sector of the province. 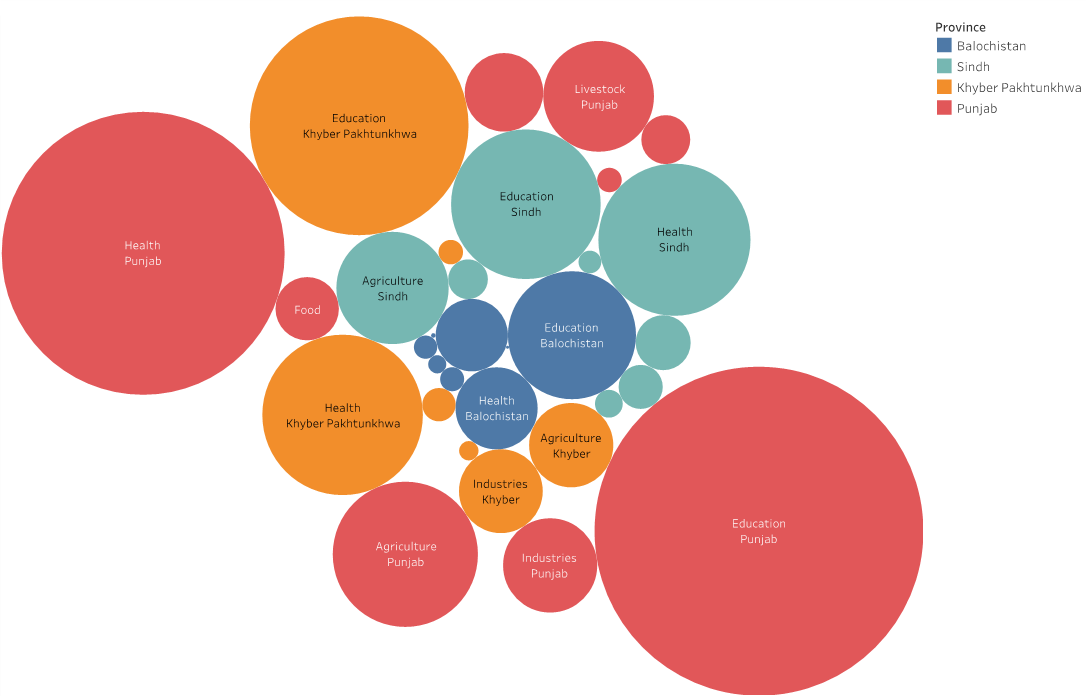 Although, we do not have the complete set of data for all of the provinces, however we can get an estimate of where the budget was spent in each of the sector. The details of this are followed by the highlights.

The highlights of the data are: 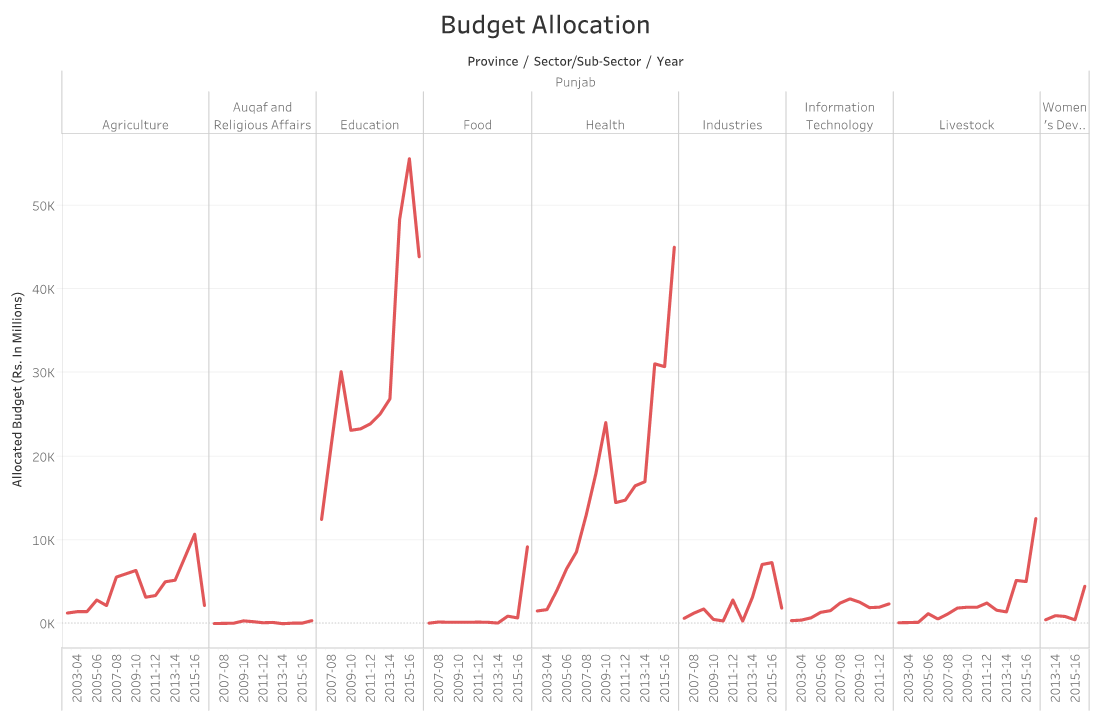 KPK has had a total budget allocation of PKR 277,390, while as with the population of over 36 million. Making KPK the second highest budget allocation among our sectors, with an averaging of 7,705 million investment per one million people among these sectors.

At Khyber Pakhtunkhwa, we can see a similar trend of education and health sectors being on the high list for budget allocation. While as the lowest are for food and IT in this province.  Another thing to note is that KPK is the only province in Pakistan that doesn’t have the women development sector, and thus no budget was allocated for it. 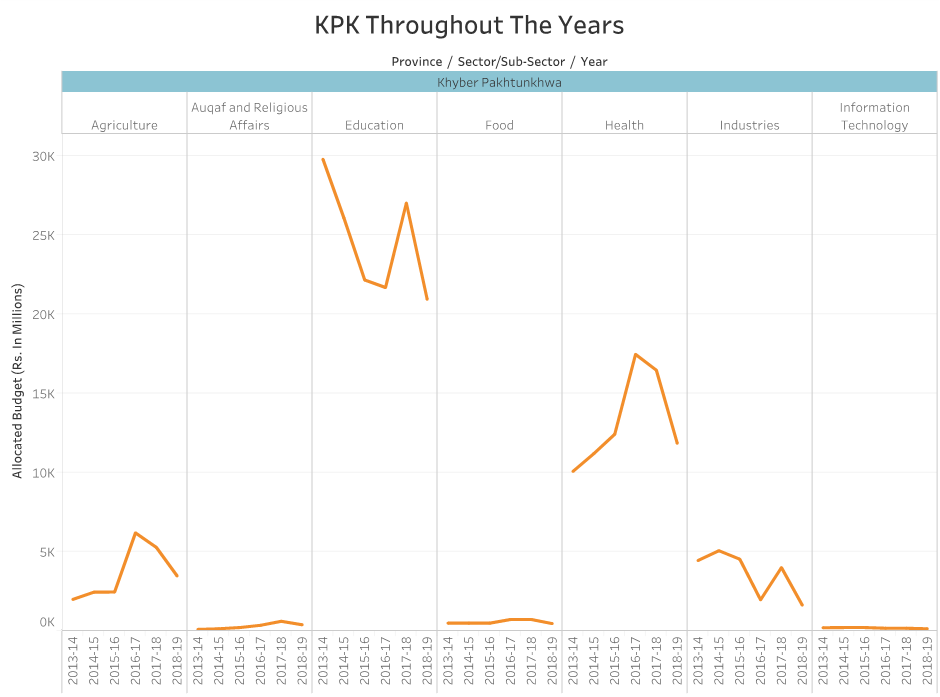 Through the graphs, we can see a fluctuating trend among all sectors. However, we can see that the education sector in the province is gaining massive attention by the budget. Similarly, health is also one of the top allocators of the budget, followed by agriculture. 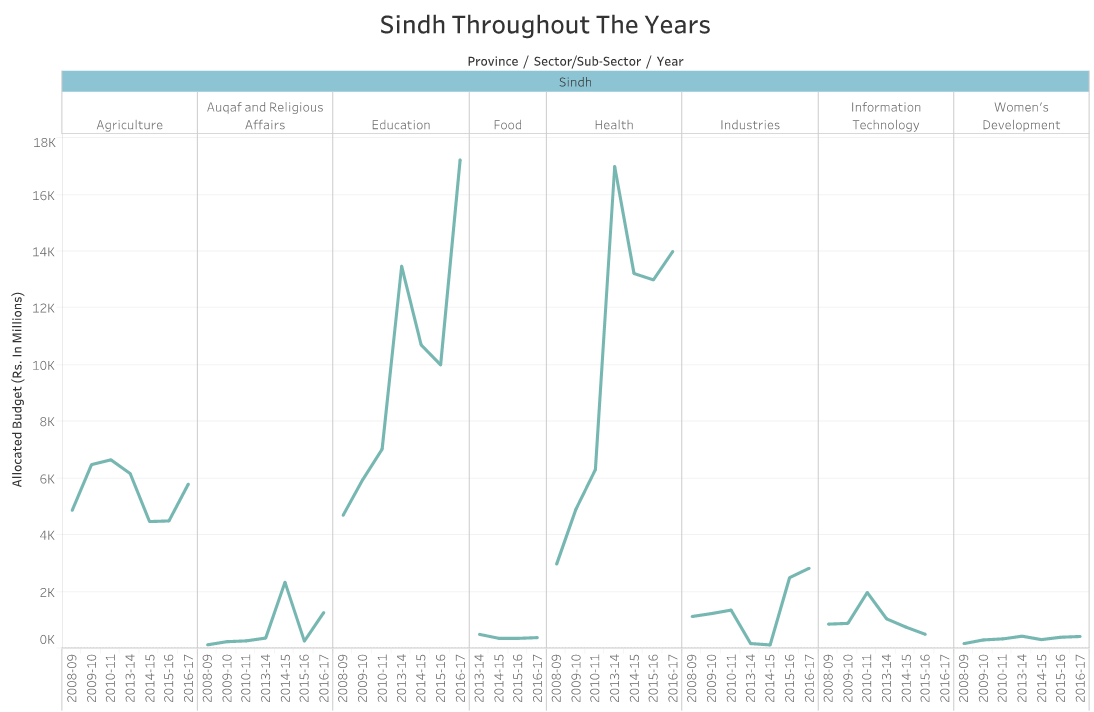 Agriculture constitutes the largest sector of our economy. Majority of the population, directly or indirectly, dependent on this sector. It contributes about 24 percent of Gross Domestic Product (GDP). Therefore, it is important to analyse the Agriculture sector.

Highest allocation to agriculture in seen in Punjab as it is the area with most irrigation. Although, from 2009 to 2010, decline was seen in Punjab’s allocation. A growing trend is seen Balochistan. The budget increases for KPK till 2016, then observes a fall.

The fall can tell the existence of economies of scale, i.e. fertilizers (or any spending on agriculture) can give positive returns till a certain point, might sustain same return for some point and then decline.

With the population of roughly around 11 million, Balochistan has accumulated PKR 92, 117 million since 2008 among the selected sectors. Making an investment of little over 8,374 million per million people among our sectors.

Balochistan has the third highest allocation of budget in women and development sector, of 68 million, with the lowest for the food sector at PKR. 30 million.

To conclude, given these sectorial allocations, we can see the apparent budget allocated towards these areas, but their spending ensures if this budget is translated to results or not, and how. 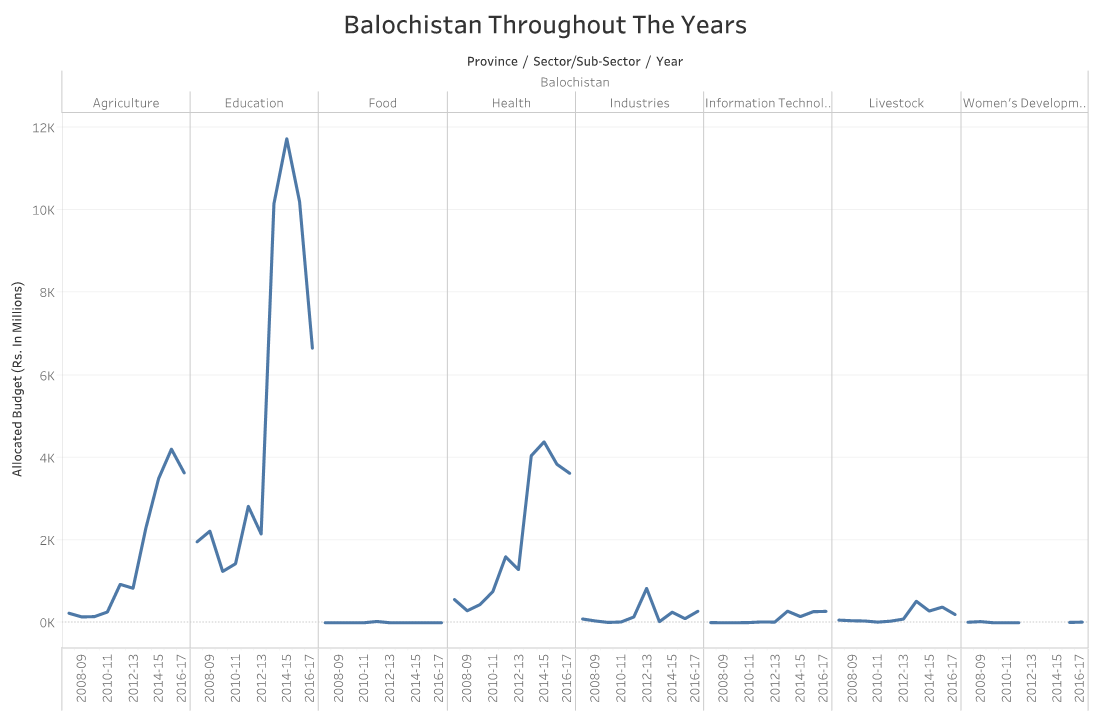 This blog post is written by Ayesha Naeem, student from the batch of 2020 at Lahore University of Management Sciences.