Poverty is a curse which needs to be cured. Today, poverty is one of the biggest social and economic issues in Pakistan. According to the latest estimates of the World Bank, almost 40 percent of 107 developing countries are highly exposed to poverty. Pakistan is ranked among the 43 countries that are most exposed to poverty risks, as about 60% of its population lives below the poverty line.

The rural areas of Pakistan are in a more vulnerable position due to their complete dependence on agriculture sector. The most affected province is Balochistan with the poorest population of the country living there. One of the main causes of poverty is the income inequality between the rich and poor. The World Bank Poverty and Shared Prosperity Report 2018 has noted that from 2010-2015 the growth of incomes of the bottom 40% in Pakistan has been merely 2.7% whereas the growth in incomes of the average population was recorded at 4.3%. The statistics reveal that there is a wide gap between household income growth of low socio-economic class to high socio-economic class. This rising income inequality is an alarming threat to Pakistan.

An analysis of HIES (Household Integrated Survey) of 12 years from 2001-2013, provides a clear picture of the consumption inequalities between the rich and the poor and is a good measure of the welfare inequalities between the two groups. For the purpose of analysis, data was collected on average monthly household total expenditure and percentage expenditure on non-durable goods and services based on 32 consumption categories. The expenditure values were deflated using year 2000 as the base year for an accurate comparison across the years. 5 income quantiles were created out of total household income to investigate the role of consumption in economic inequality.

Education is one of the strongest indicators of a country’s progress. It is very crucial for the growth and development of a developing country like Pakistan. It is also a symbol of social status and wealth. Fig 1 shows the change in the overall consumption patterns of Pakistani households on education over the years. The green line shows the overall trend for all income groups. Since 2001, there has been a growth in education spending from 4.4 % to 5.4% with a sharp increase seen after 2010. This fast growth can be explained by a rapid increase in public spending on education sector after 2010. A wide gap of 6% can be seen between the lowest income group (1) to highest income group (5). Also, a clear correlation can be identified between income group and growth in consumption expenditure. As you move from lower income group to higher, the rate of growth of education spending increases across the years. This proves that lack of financial resources is the main factor that prevents poor households from providing their children valuable education. 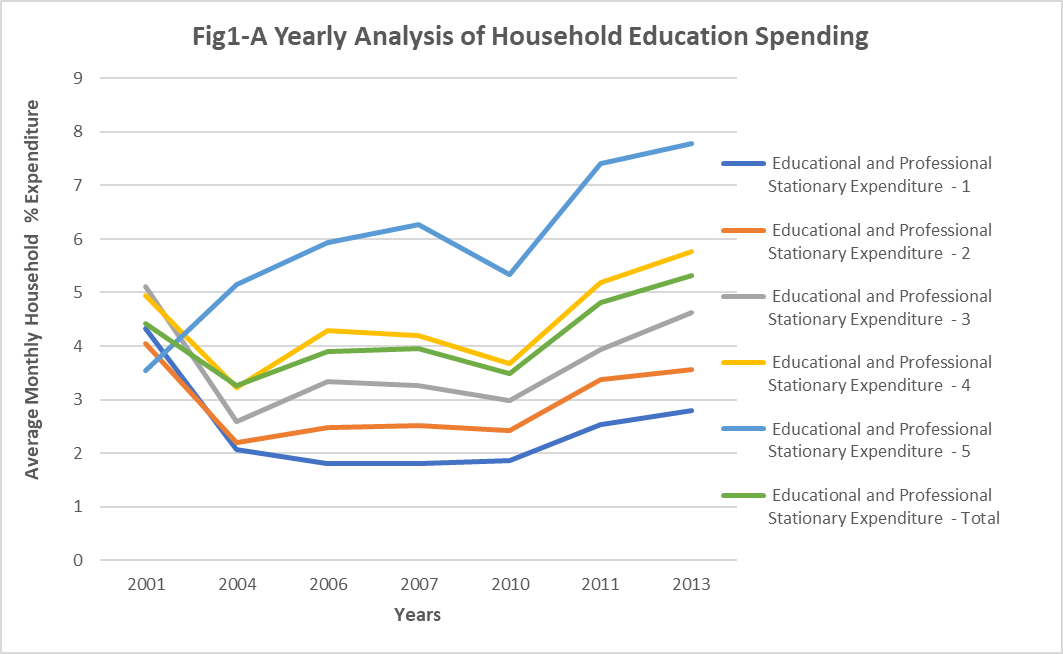 A similar disparity can be witnessed between the most developed province Punjab and the  least developed province Balochistan. Fig 2 shows the change in education spending of rural households of Punjab and Balochistan for the poorest and richest income groups. It is unfortunate to note, that in 2013 there is a huge gap of 4% between the two provinces for the highest income group. However, it is surprising to note that this gap is much smaller of only 1.2% for the lowest income groups. It highlights that the provincial welfare inequality between the rich and poor is due to the difference in public education spending budgets for the two provinces rather than income inequality. Households are not spending on education because they are not provided with the necessary facilities. Where Punjab experiences a high growth in its education spending, Balochistan is left far behind in the social and economic progress. 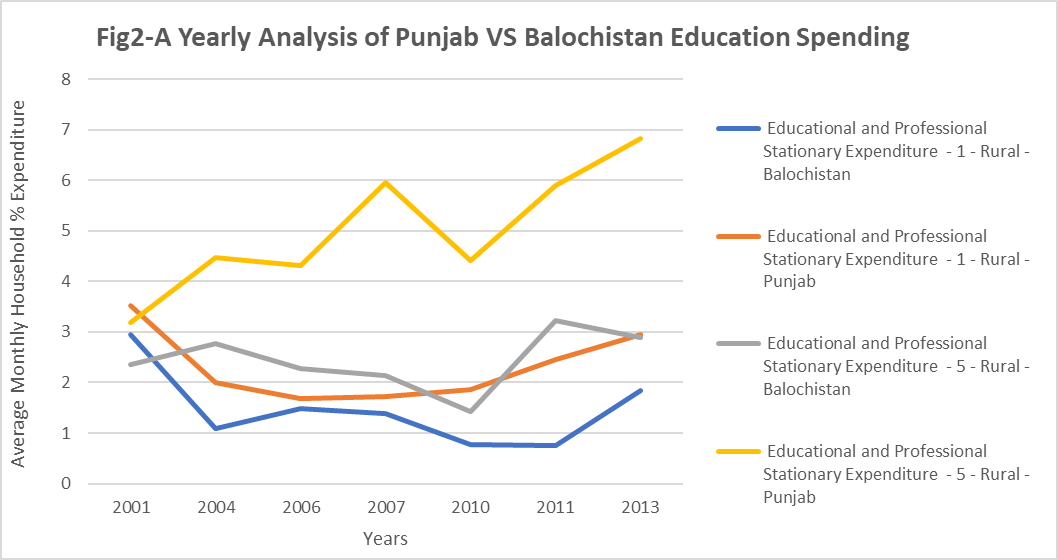 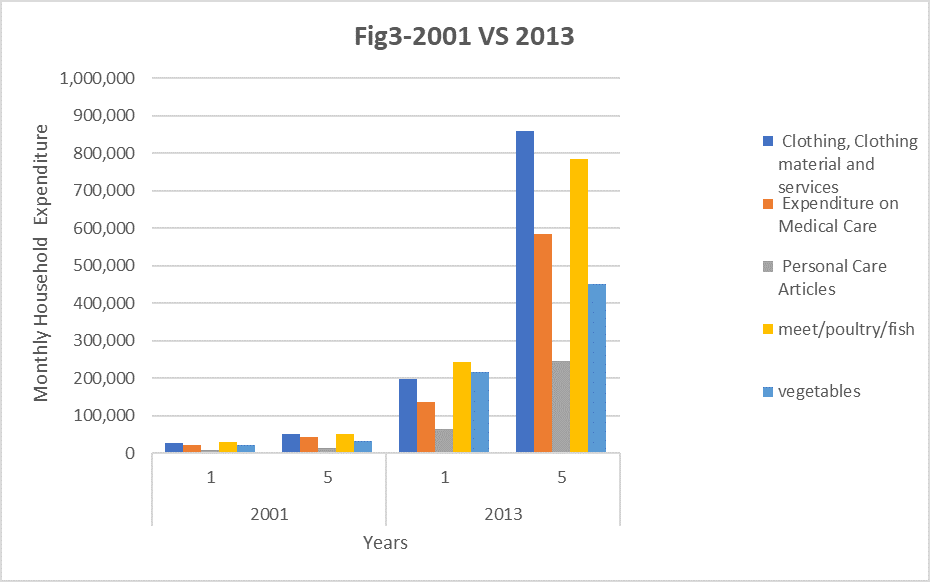 This blog post is written by Zainab Salam, student from the batch of 2020 at Lahore University of Management Sciences.